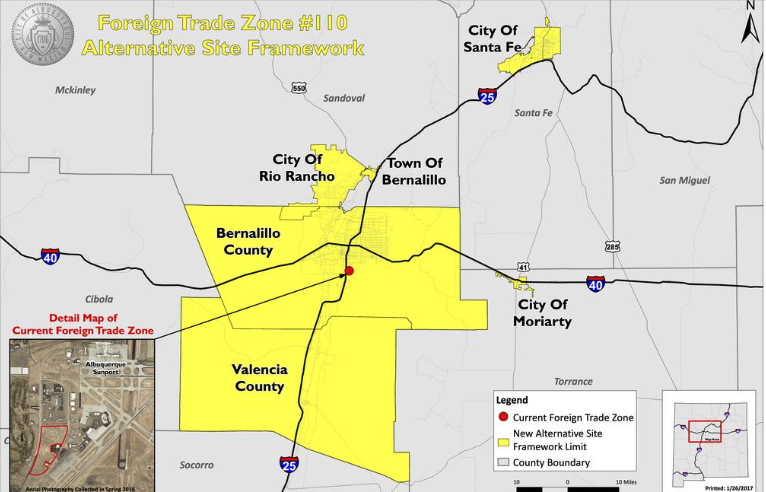 ALBUQUERQUE, N.M. — The benefits of Albuquerque’s 42-year-old foreign trade zone just got a whole lot bigger, following federal approval to allow companies throughout the central Rio Grande area to participate. Under the expanded “Alternative Site Framework,” announced by Mayor Richard Berry on Thursday, all companies in Bernalillo and Valencia counties, and in Rio Rancho, Bernalillo, Moriarty and Santa Fe, can now apply for inclusion in the foreign trade zone. Until now, the zone has been limited to companies within the original 62-acre site at the Albuquerque International Sunport. Foreign trade zone-eligible companies that import materials or products and then add value to them for re-export to international markets can avoid paying import tariffs. Companies that sell final products in the U.S. also can delay payment until their sales are complete, and some may be able to avoid tariffs even when selling on the domestic market. “We are excited to make this tool more accessible to manufacturers throughout the region,” Berry said in a statement. “Companies that utilize the FTZ can greatly improve their cash flow by avoiding paying tariffs on imported materials until the final product is sold, and in many cases, can avoid having to pay them altogether.” The zone has been used by only a few companies since its creation in 1984, largely because it required businesses to set up their operations at the Sunport, said Randy Trask, manager of the Albuquerque Bernalillo County Trade Alliance. Companies could previously file for “subzone” eligibility outside the 62-acre site, but that cost tens of thousands of dollars in application and legal fees, plus a six-month wait. “Now, under the reorganization, we’ve negotiated a newly designated geographic area,” Trask said. “Businesses can get their applications processed in just 30 days, and at a fraction of the cost.” The expanded zone will make the recently announced Central New Mexico Rail Park in Valencia County more competitive, while helping small, cash-strapped businesses throughout the region conduct import-export operations.
“Without the reorganization, the rail park would have no access to the trade zone,” Trask said. “This makes the park more competitive in recruiting companies, and our existing small businesses can gain more access to it.” It makes the region more attractive in general for companies to locate here, said Gary Oppedahl, head of Albuquerque’s economic development department. “This is an important step toward helping our existing manufacturing base grow, in addition to becoming a more attractive location to recruit new companies,” Oppedahl said. The city filed its application for foreign trade zone reorganization last year, after a public-private partnership headed by the Mid-Region Council of Governments commissioned a study on central New Mexico’s existing transportation infrastructure, business climate and competitiveness to grow and diversify. “We launched the feasibility study last March, but very quickly into the process we uncovered some immediate projects we could start pursuing,” Berry said. “There was no reason to wait until the study was completed to get to work on low-hanging fruit like our FTZ.” Source: The Albuquerque Journal
[/vc_column_text][stm_post_bottom][stm_post_about_author][stm_post_comments][/vc_column][vc_column width=”1/4″ offset=”vc_hidden-sm vc_hidden-xs”][stm_sidebar sidebar=”272″][/vc_column][/vc_row]

This site uses Akismet to reduce spam. Learn how your comment data is processed.